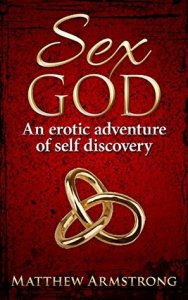 Unfulfilled in his marriage and life, Alex Sterling makes an indecent proposal to his wife, Angela, which sets them off on an erotic adventure of self-discovery, revealing dark and repressed parts of themselves. On the verge of losing everything that is most important to him, Alex is a man in early life crisis, playing a high-stakes game and going to extreme measures to save what he values most. Is he going through a mental breakdown or is this some sort of spiritual transformation? He has no idea as his grasp on reality crumbles and all his worst fears are inevitably realized.

The story is told in the voice of Alex, a personal trainer and estate agent living in Spain. He’s married to Angela, they have two children. Alex is bored senseless in his marriage and approaches his wife asking her for an open relationship, which she readily agrees to.

It appears that Angela is eager to reignite a past relationship, sort of like ‘the one that got away’. She admits this to Alex, who has already made that discovery by checking messages on her phone. This information, coupled with the fact that she suddenly becomes keen on improving her body seems to put Alex off having the sexual affair he was originally eager to begin.

To be honest I struggled with how this couple had ever come together in the first place, they continually remind each other that they love each other, yet the words are completely unbelievable to me. When Angela states that she’s not physically attracted to Alex I literally cringed, I found their relationship so awkward and unnatural that it spoiled most of my reading pleasure.

The book cover is quite appealing and spoke of what the story was about.

However, the sex scenes were very well executed and well written. I also thoroughly enjoyed the part where Alex embarked on his journey of self discovery after Angela left Alex for her lover, my heart went out him to the pit of my stomach. Although I felt that the ending was rushed somewhat, I was happy that Angela returned and provided me with that happy ending.

Overall I enjoyed the majority of this book, I award Sex God three personal trainers.